About Ulla-Britt to all of our friends

July 21, 2020. This post is published on my blog because many ask how Ulla-Britt is doing. The situation has gradually and considerably deteriorated, but what would I be without the help I had to take care of Ulla-Britt. Partly by our dear children, but also by staff from LAH and Hemtjänst Bråstorpsgruppen. An injection pump that distributes sedatives, which also facilitates breathing, has been installed. Despite all the help she has received, she is tormented by panic attacks and is dependent on someone being with her all the time The night between the 19th and 20th of July I was with Ulla-Britt all night and the night between the 20th and 21st Susanne has been watching. The night to come, we have been promised help with night watch by the Home Service. In addition, Rosmarie has returned and right now Magnus is here and sitting with his mother. So we will replace each other with the home service tonight. Tomorrow Wednesday, Anna and her family are expected to come to Motala where they will be able to stay with good friends. We want nothing better right now than for her to fall asleep in peace in her Savior's embrace and move to the land where there is no suffering. There she will have a new body of glory that is completely healed and will live forever with the whole heavenly family. But we can not decide either day or time. Only God knows when the fragile thread breaks. 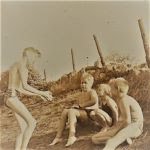